I have always been fascinated by slave trade statistics and charts listing the ethnic/regional origins of Africans in the Americas. I am convinced they can be very educational and useful for anyone wanting to learn more about their African roots. Just as long as you keep in mind their inherent limitations. This kind of aggregated information is probably most relevant on a population level rather than for any personal quest as we all have unique & individual family trees.

On this main page i will be posting a few charts generated from the excellent Slavevoyages Database (2010 version). Via the drop-down menu or these direct links below you can see charts listing the ethnic origins of dislocated Africans and/or their cultural influences split out per region and usually obtained samplewise. I will add on new ones regularly after also posting them on the main blog.

Correlating slave trade records with the population genetics or ethnic origins of Afro-Diasporeans is always tempting but can hold many pitfalls even if the database is deemed to be representative for a specific region/country. Because you cannot just assume that it will be a straightforward extrapolation. Some factors to take into account:

Obviously there might have been other factors as well that could explain genetic results being disproportionate to what you might expect based on slave trade data. I will return to this topic frequently in my upcoming blog posts (see the AncestryDNA section and its subpages). Enough with the caveats & disclaimers for now and on to the charts 🙂 They can be reproduced if you select the same search parameters as i did for:

Of course you can do your own queries as well with different variables which will produce different numbers/charts. Also there is a separate seach section on the site called “Estimates“, which “takes into account the incomplete nature of historical evidence and adjust figures derived from the Voyages Database upwards to provide an account of the actual volume of the slave trade.” It will therefore also produce different numbers/charts if you do any search from there.

All of the Americas

This chart below shows the percentage of disembarked slaves according to century of arrival. The dating of these arrivals and the transition to a majority of locally-born “creolized” populations is fundamental for tracing back African ethnic roots. For more detailed discussion read this post: From African to Creole

This chart below shows which time periods were characterized by the most slave arrivals from Africa. There’s a clear distinction between Virginia and South Carolina, the main points of entry for Africans into the USA. South Carolina also having a minor but significant share of African arrivals in the early 1800’s of about 30%. While Virginia’s African imports were mostly occurring before 1750, implying a rather early Creolization (read more in this post).

This breakdown in %’s is measured along the row. It shows

This chart shows the underlying numbers: 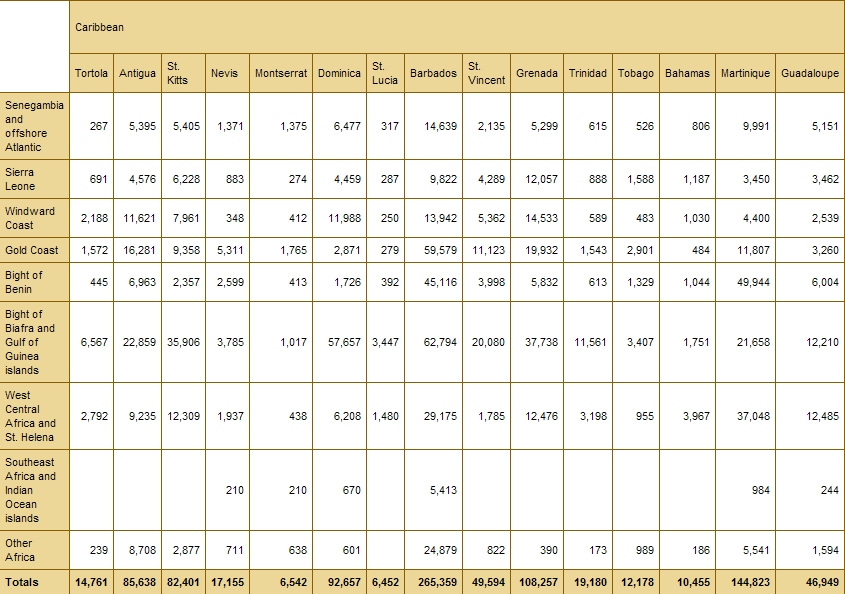 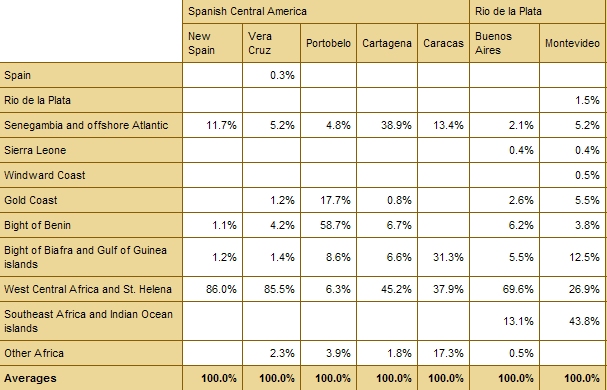