Virgin Islanders (US) have multiple ethnic African origins across West & Central Africa just like other West Indians. And similarly they also have absorbed within their genepool many migrants coming from other surrounding Caribbean islands. Making for a complex mix to disentangle. However because of their rather unique colonization history involving the Danes – whose slave trading activities were centred mainly on their fortresses along the Gold Coast –

it might be that proportionally speaking the share of Ghanaian ancestry for Virgin Islanders could be among the highest within the Carribean or even the entire Americas. I will post some slave trade statistics that seem to be in support although they can only give an inherently limited perspective. Plus i will discuss the highly valuable testimony concerning the ethnic make up of Virgin Islanders written down by the Moravian missionary Oldendorp circa 1768. His report of originally 3000 pages (!) is among the earliest ethnographic descriptions of Caribbean slaves.

A very useful overview of the colonial history of the Virgin Islands can be found via these websites,  http://www.virgin-islands-history.org and http://www.virgin-islands-history.dk or also just Wikipedia. For now i will simply mention that besides the Danes also the German Brandenburgers (Prussia) were heavily involved in the early slave trading to Saint Thomas and Saint John. Saint Croix was bought by the Danes at a later stage from the French (1733). In the late 1700’s also the English were selling slaves to the Virgin Islands. From the beginning many of the slaves brought in especially to Saint Thomas (which functioned more as a freeport than a plantation economy unlike St. Croix) were meant to be distributed to other colonies, mainly Spanish ones. This reexport of slaves to mostly Cuba and Puerto Rico continuing even after the official abolition of slave trade in the early 1800’s when slave smuggling seems to have been rampant (Dorsey 2003).

Given the circumstance that both the Danes and the Brandenburgers were concentrating most of their slave trading efforts on the Gold Coast, it’s not surprising that Ghana is shown as the predominant embarkation region both for documented (orange background) and estimated (light blue background) slave voyages to the Virgin Islands. Below charts taken from the slavevoyages database. 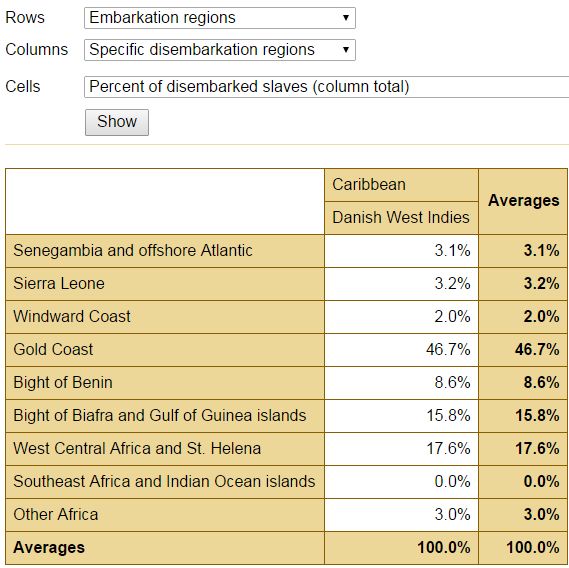 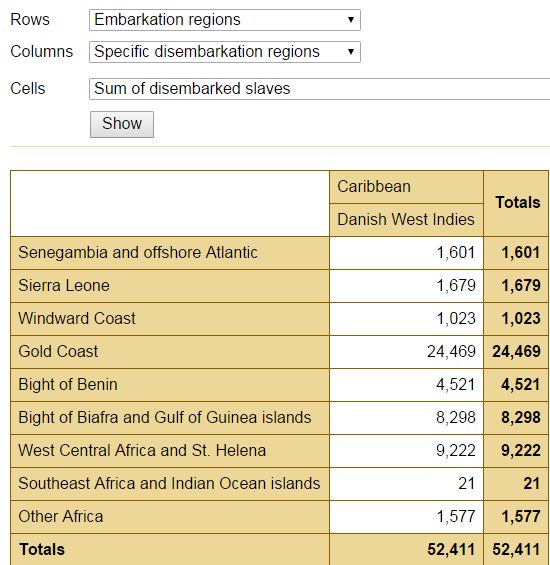 In below charts the Brandenburger slave trade (“Baltic”) is combined with the Danish one. We can see that: 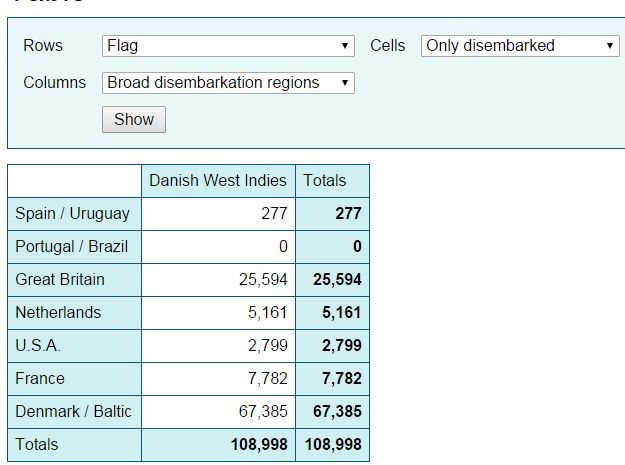 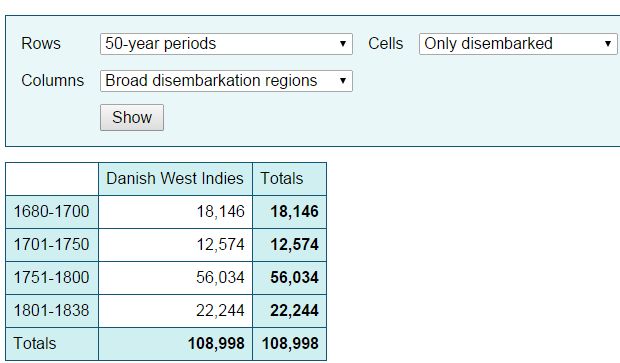 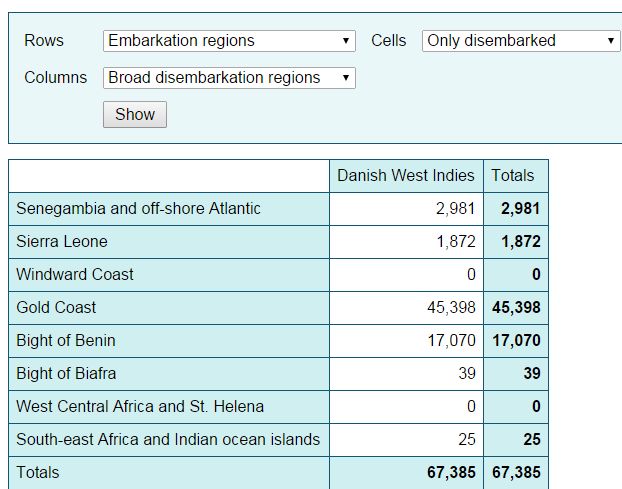 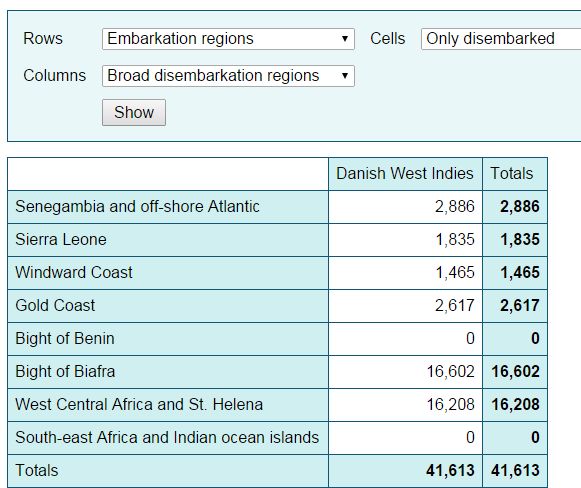 Eventhough as already mentioned Virgin Islanders, similar to other West Indians, will have mixed African origins to varying degree spanning the same familiar range from Senegal to Angola. And also given the fact that slave trade to especially Saint Thomas was often meant for reexport the apparent dominance of Ghanaian slaves might still have left a correlating genetic legacy among Virgin Islanders as well as disproportionately influenced local creolization / African retentions. We can find some intriguing clues pointing in this direction from first of all the famous slave revolt of Saint John in 1733. Aside from the Wikipedia article you can also read many more details about this historically very significant slave rebellion via this excellent website (scroll down halfway for analysis).

“The 1733 slave insurrection on St. John in the Danish West Indies (now St. John, United States Virgin Islands) started on November 23, 1733 when 150 African slaves from Akwamu (present-day Ghana) revolted against the owners and managers of the island’s plantations. Lasting several months into August 1734, the slave rebellion was one of the earliest and longest slave revolts in the Americas.”

This early concentration of Ghanaian slaves in the Danish West Indies was a direct result of the Danes being a relatively “minor player” in the Trans Atlantic Slave Trade. Not able to compete with other main European powers their source of African slaves was therefore mainly limited to the Gold Coast where they had several forts which remained under Danish administation untill the mid 1800’s! See also this Wikipedia article, the most important slave castle being the one nearby presentday capital of Accra, the socalled Osu Castle, also nearby the border with Togo. The Akwamu state (Akan speaking) can also be seen in map below. 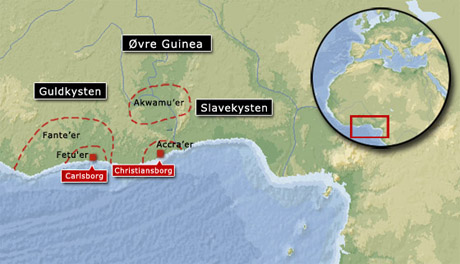 Another major hint of Ghanaian legacy among Virgin Islanders is their former Dutch-based Creole language, called “Negerhollands”. The Dutch influence being a result of a majority of early planters in the Virgin Islands being of Dutch descent (see Wikipedia article for more details). Regrettably this exceptional Creole language has gone extinct recently but linguists are very fortunate to have historical documents written in this language dating from already the 1760’s, very unique for a Creole language!  The pioneering Moravian missionaries on the Virgin Islands are to be thanked for this (see this brief overview). When it comes to recognizable African influences a recent study (Sabino 2012) identifies mainly Kwa retentions. Most Ghanaian languages, incl. Akan ones, being grouped under this language family (see also maps in the Lower Guinea section).

“Sabino argues that early Africans were faced with different varieties of Germanic languages (Danish, Dutch, English), including reduced forms, and different Kwa languages (Ga, Akan, Twi, Ewe). In terms of Negerhollands’s emergence, she identiﬁes interactions among Africans as crucial because they shared resources and common life worlds, and their encounters were interactionally rich and allowed for linguistic negotiation. Africans imposed structures from their shared linguistic background onto the Germanic input they encountered, thus molding it according to Kwa typological structures.“

This brings me to the final part of this blog post which is about the priceless anthropological work done by Moravian missionary Oldendorp (for more background info read this article). Partially in order to facilitate his Moravian Church’s missionary work but probably also out of genuine ethnographic interest he interviewed dozens of slaves from the Virgin Islands, during his stay there in 1767-1768,  about their beliefs, history, ethnicity etc. Taken from Jones (2010) this overview below describes all the socalled ‘nations” he encountered during his stay. It’s remarkable for several reasons but one thing standing out especially is how the ethnic backgrounds (or proxies thereof) for captives from the Gold Coast/Ghana (Akan, Guang, Ga, Ewe) are described in much greater detail than found in other sources (compare for example with the Anglo-Caribbean Slave Registers). 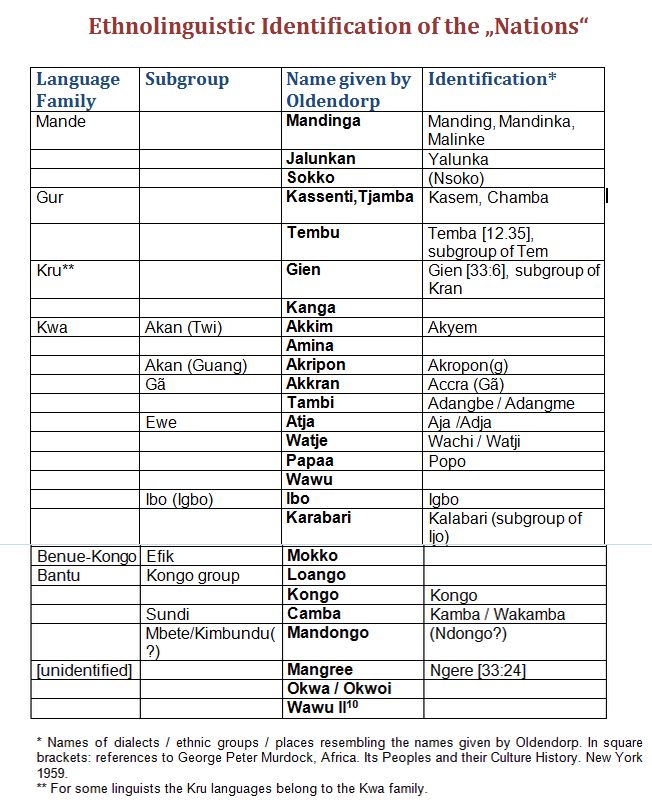 “With regard to the relative strength of the nations on the Danish islands Oldendorp writes (p. 486): After the Creioles the Amina [=Akan speakers] are the most numerous, followed by the Karabari and Ibo, then the Sokko, Watje, Kassenti and Congo, and after these the Kanga, Papaa and Loango. The others are less numerous, there are very few Angola, and the Fula are the fewest.”

“We may conclude that the Danes, whose principal bases in Africa lay in Accra and Fredensborg (in what is now southeastern Ghana), drew most of their slaves from the Gold Coast (the Amina) and the Niger Delta (the Karabari and Ibo), whilst slaves from what are today northern Ghana, Togo and the Loango-Congo region were likewise well represented. Only a small number came from west of Elmina (in today’s Ghana): a few from Senegambia, others from southern Liberia or neighbouring areas of Côte d’Ivoire.”

” It is striking that fewer slaves came from the far interior than was the case with the persons interviewed by Koelle in Sierra Leone in the nineteenth century [see this blogpost]: Only in the case of the “Mandingo”, “Sokko” and “Kassenti” (as well as with some of the “Fula”) is it conceivable that they had lived more than 300 km from the coast.”

“In order to assess the importance of Oldendorp’s research, it is worth comparing it with an earlier description of some of the same nations, written by another Moravian brother, Nathanael Seidel, in 1753 but never published and apparently not consulted by Oldendorp. Nathanael wrote of “about 60 nations” on St. Thomas and St. Croix, but named only twelve of them: Criol, Amina, Popo (Oldendorp’s „Papaa“), Loango, Calabary (Oldendorp’s „Karabari“), Queda (? = „Whydah“, mentioned by Oldendorp once in the form „Fida“), Congo, Mandingo (Oldendorp’s „Mandinga“),Watjee (Oldendorp’s „Watje“), Mandongo,Ybo (Oldendorp’s „Ibo“) and Cahsanty (Oldendorps „Kassenti“).”

It’s important to place these statements in their proper context. They’re obviously only relating to a timeperiod in between the 1750’s-1770’s. Both before and after this period the composition of African ethnicity among slaves in the Virgin Islands might have been different. Given the later involvement of English slave trade it seems natural to assume that the share of people from the Bight of Biafra (“Ibo’s, Karabari”) and Central Africa (“Loango’s”, “Congo”s”) might have increased after the 1770’s. Interestingly though, despite the harsh slave regime on the plantations, the locally born slave population, the socalled “Creoles” seem to have been quite numerous, even more so than the second largest group of the “Amina”. In fact many of these locally born slaves might have had 1 or two parents or any number of grand parents from Ghana themselves given the early preponderance of slave imports from the Gold Coast! Which would augment even more so the share of slaves originally from Ghana. They would clearly not have been all Akan speakers though. It’s been suggested that the socalled “Amina” were none other than the Akwamu, an expanding Akan speaking people located nearby the Danish fort at Accra. In this southeastern part of Ghana there are however also many non-Akan speakers to be found, especially Ewe, Guan and Ga speakers (see Ghana maps in the Lower Guinea section). It is known they were targetted by the Akwamu in the late 1600’s/early 1700’s making them perhaps the chief slave sources at that time. According to Oldendorp especially the socalled “Watje”  (=assumed to be Ewe speakers) seem to have been numerous among slaves still in the 1760’s. This aside from non-Akan speaking slaves from the Ghana interior like the “Kassenti” (assumed to be Gur speakers) and the “Sokko”. From Wikipedia:

“At the peak of their power, the Akwamu state encompassed much of the eastern part of the present-day Gold Coast. It is traditionally thought that between 1677 and 1681, the Akwamu state conquered the states of Ladoku, Agona and Whydah, as well as the Ewe people of the Ho region. The Akwamu also conquered the Ga people and occupied the old Ga Kingdom.

In 1693, the Asimani of Akwamu led a raid and seized Osu Castle (currently the seat of the Ghanaian government), from the Danish colonists. The Akwamu thus controlled many of the trade routes from the interior to the coast in the eastern half of what is now Ghana and created a capital at Nyanoase.

In the 1720s a civil war in the Akwamu state caused great hardship. The victors sold most of the King’s allies as slaves and they were transported to the Caribbean island of St. John. In 1733 they fomented a slave revolt on the island.”