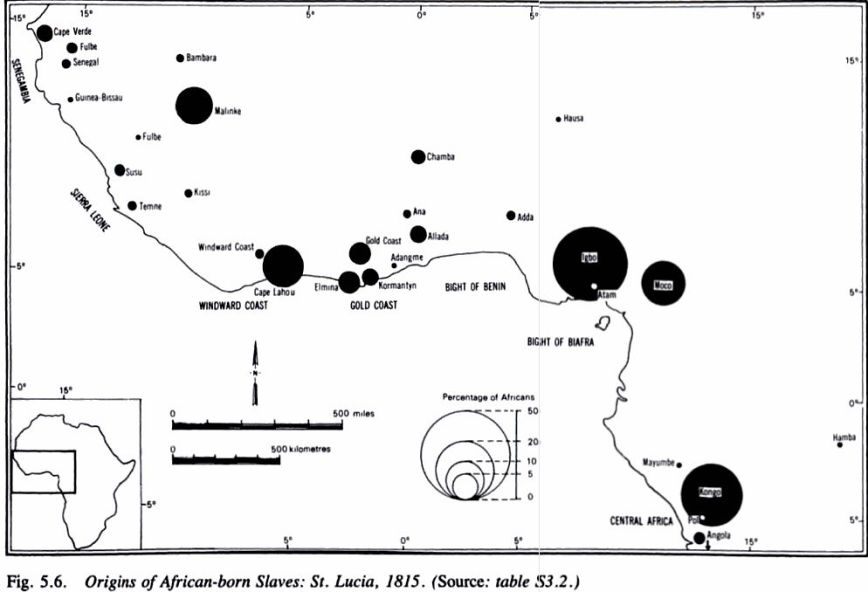 The top 3 of most frequently mentioned African origins in the Saint Lucia slave census of 1815 is exactly the same as it is for the Trinidad slave census. This is perhaps not so surprising as in both cases it seems to reflect the shift in British slave trade during the final decades before abolition (1790’s-1807) towards an increased flow of captives from the Bight of Biafra as well as Central Africa (see columns 11/12 in this chart). Again similar to Trinidad the census also describes a locally born “Creole” slave population whose African origins might more closely reflect French slave trade patterns, especially to Martinique. Afterall Saint Lucia was only definitely incorporated into the British Empire in 1803 when its slave owning settler class was still predominantly of French origin (source).

In fact the relative share of these “French Period Creoles” is much more significant for Saint Lucia than for Trinidad, being almost 80% of the total slave population! Slaves making up almost 85% of Saint Lucia’s total population in 1810 while almost 10% were free people of colour and about 6% European. The Afro-descended freedmen most likely also having African origins dating from the French rule period (Higman 1984). Before i discuss this in more detail let’s first have a look at the complete census which naturally only provides a snapshot of African origins for a restricted timeperiod and for a minor part of Saint Lucia’s slave population at that time (16%).

Despite over 150 years of continuous British rule and over twenty-five years as a member of the British Commonwealth most Saint Lucians still speak their French-based & Niger-Kongo influenced Creole or Kwéyòl language. It is a shared legacy they have in common with other officialy English speaking Caribbean islands like Dominica, Grenada and Trinidad. For Saint Lucia this can be traced back to historical ties with Martinique which sent over the first French settlers in the late 1600’s as well as continued to transfer slaves (either African born or Creole) to Saint Lucia and neighbouring islands throughout the 1700’s. When exploring the African ethnic roots of Saint Lucians we should therefore not stop with the census held in 1815 which, eventhough very valuable, only identifies the origins of less than 15% of the African born population. It is the over 80% “French Period Creole” slaves and freedmen whose ancestry will be most representative of Saint Lucia’s African roots, taking a purely statistical approach.

Below we can see the registered birth places of this Creole majority (78% of all slaves). From the 12,750 Creole slaves 9,821 were born in Saint Lucia, which is about 77% of all Creole slaves. But quite possibly the 2,021 Creoles without any further description were also Saint Lucian born. Otherwise it’s first of all Martinique and then other formerly French ruled islands like St. Vincent and Grenada that get mentioned most frequently. If the census had been held in an earlier period most likely Martinique’s share would have been even higher. Also right after the abolition of slavery by the English in 1834 another wave of runaway slaves from Martnique would arrive in Saint Lucia (see third quote below). 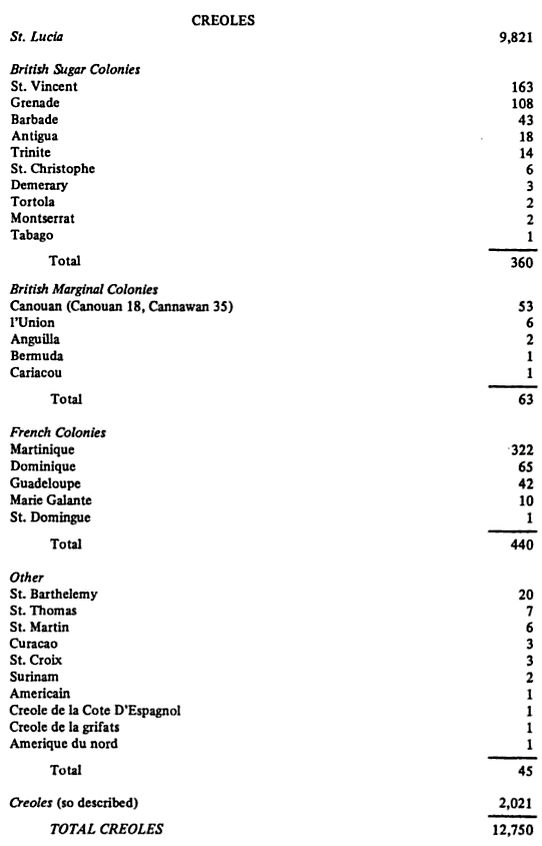 “Slave trading records from the 18th and 19th centuries indicate that the slave trade on St. Lucia was controlled from Martinique, even in times of British rule: . . . it seems likely that Martinique would have been able to supply St. Lucia’s slave needs to a large extent and that established slave merchants in Martinique would have tried to keep the St. Lucian trade in their hands. In the latter part of the eighteenth century Martinique was the third largest slave exporter listed in the British returns, after Barbados and Jamaica . . . But during this period neither Barbados nor Jamaica exported to St. Lucia.” (LePage & Tabouret-Keller, 1985, p. 60)” (Source)

“One early record, a census taken on Martinique in 1680 cited by Alleyne (1996, p. 44), indicates that at that time, speakers of Benue-Kwa languages such as Akan and Ewe-Fon were predominant. Since almost all slaves on St. Lucia arrived from Martinique, the same ethnicities would have predominated on St. Lucia.” (Source)

“Roberts, citing Breen (1844), recalls the period from 1834, when Britain abolished slavery and 1848, when it was abolished by France. During this time thousands of slaves from Martinique and Guadeloupe fled to St. Lucia, Dominica, and St. Vincent in search of freedom under the British flag. These slaves, known as Nèg mawon [nègres marrons] in the French colonies, came from Martinique in canoes at night to the northern part of St. Lucia and made for the mountainous interior, where they joined existing maroon communities.” (Source)

Below charts are taken from the slave voyages database and show a comparison between the documented direct slave voyages from Africa to Saint Lucia and Martinique. Intercolonial voyages, e.g. from Martinique to Saint Lucia, are therefore not included! The total numbers documented for Saint Lucia are quite minor given what we know about how big the total slave population was in the late 1700’s. Which makes sense if we take into account that intercolonial slave imports (from especially Martinique) were usually more important than direct slave imports from Africa. Almost all of the St. Lucia data is reflecting slave trade carried out by the English in the very last period before abolition in 1807 (French slave trading was by then already in decline because of the Napoleonic Wars & the Haitian Revolution). In fact the regional breakdown for Saint Lucia’s documented direct slave voyages corresponds very nicely with the census results of 1815. Showing a predominance for Bight of Biafra followed by Central Africa.

However for Martinique it’s rather the Bight of Benin that’s most significant while Central Africa is about the same proportionally and depending on time periods also Senegambia might have been important earlier on. Given what i’ve discussed above the numbers for Martinique should be assigned a higher weight when talking about the African origins of present day Saint Lucians. There’s no way of knowing how exactly these ancestral contributions were inherited and distributed among Saint Lucians across the generations, but perhaps the weighted averages shown in the third column of the last chart could be indicative for Saint Lucia’s African roots. Bight of Benin would be most important overall, followed by Central Africa and then Bight of Biafra. 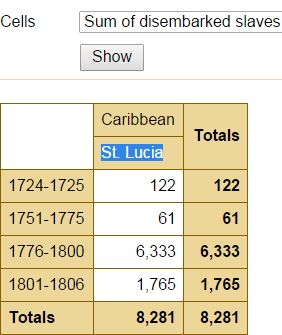 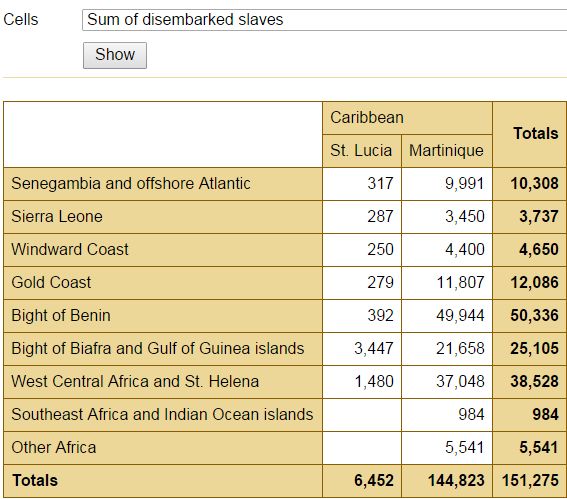 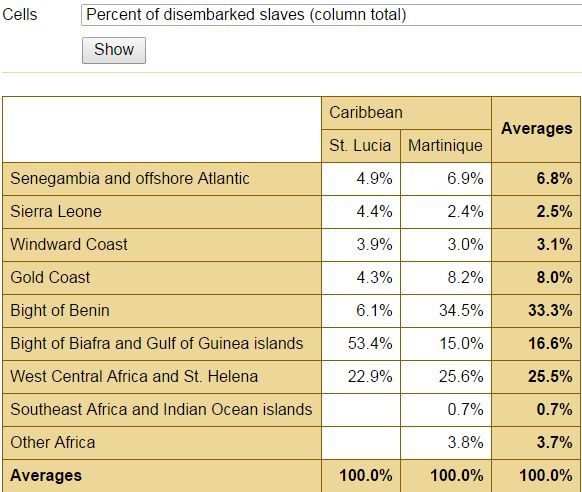